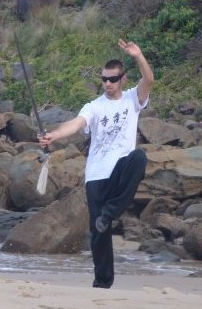 Adam Martin began his martial arts training at the age of 12. His early focus centred on the japanese arts of goju kensha (hard soft style) and shotokan karate. His attention then shifted to the chinese martial arts studying wing chun kung fu in melbourne and later in the UK. He subsequently began training in Shaolin Kung Fu at the UK Shaolin Temple.

Adam travelled the world for the next few years continually training and learning new skills. His involvement in the hospitality industry at that time, invariably led him to the practice of close quarter combat, giving him a realistic approach to traditional martial arts practices.

Adam was made the Instructor (Shifu) of the Ziranmen Kung Fu Academy in 2010, graded to Black Sash First Duan in Zi Ran Men Kung fu, Cheng Bagua Zhang and Liu He Tang Lang.

It will be a 3 hour seminar covering the basics of Self-Protection, Close Quarter Combat and Knife Attack Survival. It will be a great introduction to those who want to start learning RAW Combat and an awesome training session for those want to build and expand their foundation and fighting abilities. The event will be taking place in our new Moorabbin Training Centre.