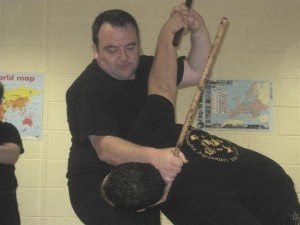 RETURN TO MAIN LIST
Liam Mc Donald started training in Martial Arts at very young age in his local town. At the tiem the only art available was Karate. After reading a article by Guru jak Othman, Liam began his journey in South East Asian Arts and started to learn Gayong Harimau under Jak. At 15 years old Liam open the first silat school in Ireland and brought Guru Jak over to Ireland on a regular bases.

Due to Jak return to Malaysia, Liam began a journey in the arts that took him to Eskrima, where he became the National Coach from N.Ireland, and hosted the 1995 European Championships, where Liam won a European Bronze Medal and 3 of his students won European Gold Medals.

In the mid to late 90's Liam return to his roots of silat where he hosted seminars for Maha Guru Richard Crabbe de Bordes, and later became the European Representative for Pukulan Cimande Pusaka. After 10 years of intensive study Liam completed his trianing andreach the rank of Guru Besar, the only in Europe at the time. In 2008 Liam decided to teach the knowledge he learnt and open up his particular expression of the art Pukulan Cimande Combat, and offer a direct lineage of the art to the founder.

Pukulan Cimande is made up of 5 animal styles Monjet, Blekok, Ular, Harimau and Naga, each Representing a range of Combat, its a style of combat which uses animal mannerism and Nature Elements conceptes and energy to develop the fighting ability of the student.

In 2008 Liam began his study of Valencia Lameco and is now the Ireland and Uk Rep under Guru Felix Valencia who study Eskrima under the Late Guru Edgar Suilte and Silat under the Late Pendekar Herman Suwanda.

My goal and focus is to help Silat grow in Ireland, for the art to expand its family in a enviroment free from egos, where people can experience this beautiful art, by doing this we keep the art alive for others to enjoy.