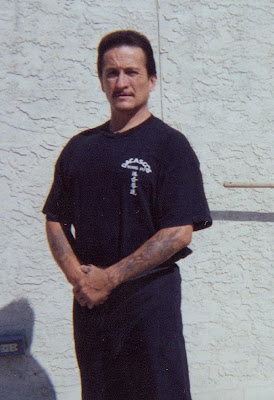 From the age of 12 when I read my first book on martial arts I have spent the last 37 years acquiring information, taking instructions, practicing and teaching what I have learned. I would like to thank all those who patiently guided me along this path and have encouraged me to create my system of combative applications.
The foundation of my style is the Kajukenbo system. From that Grand Master Al Dacascos developed his system of Wun hop kuen do. My interpertation of that plus all other systems I trained in to include techniques and tactics from: Western Boxing, Muay Thai, Jun Fan Gung Fu, Filipino boxing, Kali-Sikaran, Kuntao- Silat, Kenpo arts, Jujitsu, Judo, Submission wrestling, Filipino Stick and Knife Fighting Arts of Arnis, Kali, and Eskrima are the basis for my system.
The combination of all these arts has helped me formulate my own synthesis of training and teaching methods. Although I apply my personal method to teaching the concepts and principles of the other arts, I work hard to maintain the spirit in which I have been taught. My name is Ben Fajardo and I welcome you to Nubreed Martial Arts Systems.

WUN HOP KUEN DO
A blend of Southern Chinese Kung Fu, Northern Chinese Kung Fu, and Filipino Fighting arts with the Kajukenbo System, Wun Hop Kuen Do is a method as opposed to a style. Developed by Grand Master Al Dacascos it is an expression of his many years of research and development. Wun Hop Kuen Do (WHKD) is one of the most effective martial art for learning street fighting principles and techniques.
My Senior Instructor's are: Grand Master Al Dacascos, Simo Malia Ribiero, Sifu Gil Trancosa, Sifu Ben Dacascos, Sifu Art Dacascos, Sifu Bill Owens, Sifu Wayne Welsh, Sifu Mike Radulavitch, Sifu Leonard Endrizzi, Sifu Dave Errigo, Sifu Narin Latthitham and Sifu Richard Elizondo
I am a Professor Ben Fajardo, a student of Grand Master Al Dacascos since 1974. I am on the Board of Directors acting as Senior Black Belt in charge of Research/Development, and Secretary for WHKDIA. I am proud and honored to be an active member promoting the WHKD "Combine Fist Art Way" and the “Dacascos Tactical Systems.”

You may visit my martial arts information forum at:
http://www.makephpbb.com/nubreed/ Within that forum you will find information on various styles and systems that I have personally studied to some degree.

You will find information on: