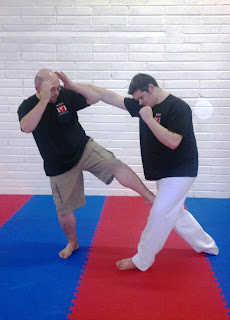 RETURN TO MAIN LIST
Paul o'Leary has been involved in the martial arts for over 25 years. he has spent much of that time training in Tae Kwon Do, he has also trained in Kung Fu and Hapkido. Over the last 15 years he has become more and more involved in the world of pressure points (kyusho jitsu) and alternative uses for movements in patterns of Tae Kwon Do & Karate etc.

Through training with Prof. Rick Clark of AoDenkouJitsu, Paul has grown his knowledge in this area and has been in demand to teach seminars to Tae Kwon Do, Karate, Kung Fu, Ju Jutsu and more stylists. In Ireland and the UK.

Having worked in the Door Security and In House Security for a number of years, Paul found that the usual training in Traditional Martial Arts could not always be relied on. Through the training and drilling of practical pattern applications in the pursuit of effective self defence and control for security work, the S.H.O.C.K. Tactics program came into life.

S.H.O.C.K. stands for Security, Hazard, Observation, Control, Knowledge. It also is a reference to the shock that a person might feel when hit on a nerve or pressure point.