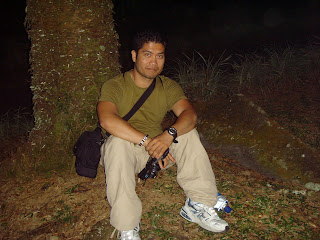 RETURN TO MAIN LIST
Angel is a Philippino descent and lived in Philippines until the age of 10, where he moved to the UK with his brother Alvin. Having finished his GCSE's at Cardinal Hinsley high school, he continued his education with BTEc HND in engineering. While studying, he was introduced to the world of martial arts by his cousin, who was studying TyGa Karate and became an enthusiast and trained for several months until finishing his academic studies. He then moved on to multi media studies, where he was exposed to all formats/platform of media, from print to films.

Several months later, he discovered Pencak Silat. Although he was only able to attend class once a week, he was enamored by the art, only after a year he was able to attend the other subsequent classes being held. 14 years on, he has continued to study and practice all aspects of Pencak Silat, training under Steve Benitez and his brother Alvin at (formerly) EastWest Studios.

Whilst teaching at the studio, he found a natural passion for training kids and also developed his video editing skills as well as camera operator. Which he since produced/directed/filmed and edited the numerous Instructional DVDs of the Pencak Silat titles.
EVENT DETAILS:
Date:
Time:
Place:
Price:
Website: http://www.silatopencircle.com/
Email ThisBlogThis!Share to TwitterShare to FacebookShare to Pinterest
Newer Post Older Post Home