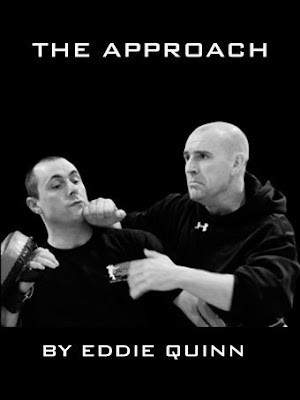 When Eddie Quinn was a young lad of 18 he found himself on the wrong side of a violent confrontation in Birmingham, England. Repeatedly stabbed, Eddie’s heart, lungs, liver, gall bladder, head and leg were all punctured.
Like more than a few who have suffered a life-threatening assault, he refused to remain a victim and chose instead to learn to defend himself.
Eddie started his Martial arts training in the summer of 1985, learning Japanese Ju jitsu. During the latter part of 1990, Eddie started training in Muay Thai, this is an art that Eddie still trains in.

At a Rick Young seminar in Nottingham, Eddie was introduced to a Silat teacher by the name of Guru Tua Chris Parker, since 1993, Eddie has been a private student of Guru Chris,
Eddie is lineage holder to Silat Fitrah.

Taking Principles from Silat Fitrah, Eddie founded The Approach, this is a easy to learn and very effective method of self defence, which can be taught quickly, and doesnt take years to be proficient in.

EVENT DETAILS:
Eddie will be donating from on the weekend:
http://www.the-approach.com/ and http://www.eddiequinnteamapproach.com/
Email ThisBlogThis!Share to TwitterShare to FacebookShare to Pinterest
Newer Post Older Post Home