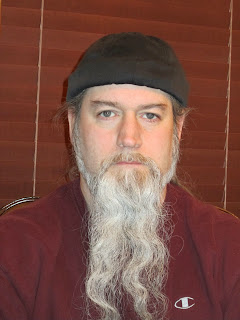 In 1965 he starting training in Boxing first by his father who was a professional fighter & champion Boxer. Later on in life his father taught him the pugilistic art of fist fighting (bare knuckle boxing) where he learned to use his head for butting in coming jabs and to the nose, chin-rubs for close quarters grappling (the clinch) his thumbs to different soft spots of the human anatomy. Low shin kicks & knee strikes & hip checks. Elbow strikes, dead weight forearm smashes as well as the judo/karate chop to soft spots to deaden different parts of the attacking limbs like the biceps and the forearm.

He then went on to learn Gojo Ryu Karate under Ron Martin Sensei who was under Chuck Meriman Shehan. This was back in the 1970... He then switched over to Ketsugo Jujutsu under Robert L Dickey Shehan at the Academy of Ketsugo in downtown Boston Mass. There he learned Jujutsu - Judo (where he competed in Judo) - Karate Ate Waza - Aikido - Yawara (hand stick) - Savate (French foot fighting) - Comando style techniques for the elite special forces. While still training at the Academy of Ketsugo he also was a student of Fu Jow Pai (Tiger Claw System) with Master Wah Don Sifu. This school was right around the corner of the Academy of Ketsugo. While here he saw amazing internal Chi demonstrations that looked very fake until it was done to Mr Freedman.

It was very real. This open up his thinking in other areas of martial development. This training took place during the 1971 & up as well. Peter Freedman then trained under two different methods of Tae Kwon Do. His first teacher was Master Dum Pil Kim who taught the R.O.K. soldiers while living in Korea. This method of Tae Kwon Do was very street like and combative.. Here he learned hand sweeps - foot sweeps - punches - kicks - multiple opponent sparring & weapons defense. Also taught there was lots of hand - elbow - foot and knee conditioning on bricks covered with rope. This school eventually closed down and then Peter Freedman went over to Jae Hun Kim Tae Kwon Do in Kenmore square Boston Mass. This school was very sport type of TKD where he practiced it for a little while before reconnecting with Ketsugo Jujutsu again. While working as a bouncer & doing store security down town Boston at Mickey Finns sporting good store he reconnected with one of the Ketsugo Jujutsu sensei from his old dojo the Academy of Ketsugo.

He then started his training again under Jim Jones Sensei & Jim Wade Sensei out of his gym Pete's Power Gym. This was a power-lifting gym as well as a Natural body building gym. He had Ketsugo Jujutsu classes 3 nights per week out of that gym.. from 1986 to 1993. In 1986 Jim Jones Sensei introduced Peter Freedman to Master teacher Guro Grande George H. Brewster where he learned Arnis - Kali - Escrima and Dumog. Peter remained with Mr Brewster until his passing in 2006. Mr Brewster passed his entire system over to Peter Freedman where he is now the lineage holder of Brewster Arnis. Guro Grande George H. Brewster was the founder of the (Boston Arnis Club) and a WW2 Vet.

Today Peter Freedman Sensei has either met or trained with many different martial artist and Grand Masters in all different methods of Martial Arts.

He has taught elite forces such as: