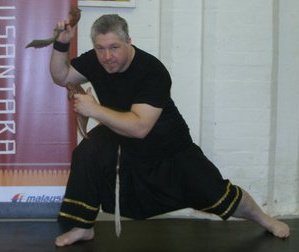 RETURN TO MAIN LIST
I began my martial journey way back in 1987 when I was 16 years old. I began like a lot of people at that age as a bullied little kid who vowed never to be bullied again.
Id seen the same movies as all my piers and wanted to be built like Van Dame and able to kick ass like Chuck ;)

My background until mid 90s was in Various Chinese systems going from Shaolin Ten animal school at 16 to Five Animal, Choy-lay-Fut; staying for a long while with Seven Star Praying Mantis and meeeting my first REAL private teacher
Sifu Todd (Although he'd hate me for calling him Sifu) Here I was lucky enough to be given my first true view of the Chinese internal systems and their REAL martial tradition (Not the BS you see at Tai-chi tournamants nowdays)
He'd been a private student of a near mythical charater known as "Billy" who had studied with the late and great Erle Montigue.

Here I began a painfull, humilitaing yet invaluble wake up call of what real martial arts are all about being beaten around the park and his flat studying Old Yang Tai-ji-Chuan! (No mystical waving hands in the park at sunrise crap!)
He showed me the truth behind the dim-yuet, Dim-mak and Chin-na of the older Tai-ji systems I also studied privatley with Jason for another couple of years in Bag-gua Chuan (Another powerful internal system from China)

Anyway Jason left to another city and I after internalizing and making my own the movements concepts and attitudes of Tai-Ji and Bag-gua and after some years of self study I chanced across the Tao of Jeet-kune-Do which was to change my martial veiw point and life still.
From making my "own way" mixing what I'd studied for years I came to Estillo Libre Escrima and fell in love with the FMAs. Their emphasis on Flow and fluidity of motion and focus on sensitivity being a stark contrast to classical Kung-fu set about a change in my thinking and movements begun with reading all of Sifu Bruce's books
left me spending several years with various schools of Kali and here was where I was first exposed to my love Silat!

I lapped all I could find like a martial sponge (Their was very little material and few teachers openly teaching Pencak Silat back in mid to late 90S) Having journed through Serak, Bukti Negara I came to the animistical
Pukulan Cimande Pusaka. It his in this wonderful system of expresion and animal mannerism that I set roots and self studied as there where no teachers here in UK at time all of Pendekar Saunders material I could find and again self studied and lived,ate and breathed Cimande.

I was until resently the UK representative of a branch of Pukulan Cimande based in Ireland and due to my growth apon a different direction I parted company with them and now I teach my own expression and understanding of Sikap Binatang (Animal thought mindset or spirit)
terming my buah "Sikap Binatang Pencak Silat".This encompasses various systems from Jawa Barat (West Java) Indonesia including Kari, Sybandah, Cikalong, Tangakan, Mahdi and Pamonyet while keeping the Cimande animal backbone.
My current journey is being drawn to look at other "Tribal" systems from around the world, which I will one day study formally and had to the buah I will pass on to my Silat Keliraga (Family)

My mission is to put the animal spirit back into Pencak Silat.