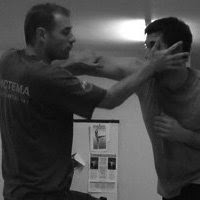 RETURN TO MAIN LIST
Started training at the age of 5 starting with wrestling until the age of 7 when he was allowed to train with his uncles who had a reputation for hard fighting and hard training. Tony's uncles train in old style karate knockdown until they devised their own style called tech style eighties to his knowledge. Ater training for years, 5 nights a week, Tony then went on his own journey and started to learn Lou gar kung fu win hich he reached high standard. He was his instructor's longest and top student 10 years to be exact. When  his instructor stopped teaching, he found wing chun in which he is a purple sash. During this time he also done kickboxing and jiu jitsu.
Unfortunately Tony found that street fights did not work out as good as they should have with his traditional martial arts skills so he took another path towards the self defence side. No belts no rituals and no bull shit. This path lead him to train with some of the best in the world, Mick Coupe, Glenn Zwiers and now  Tony Bergin is flying the flag for Luke Holloway as the rep for Scotland for Raw Combat International.
EVENT DETAILS:
Date:
Time:
Place:
Price:
Website: http://www.systemaconcepts.com/
Email ThisBlogThis!Share to TwitterShare to FacebookShare to Pinterest
Newer Post Older Post Home