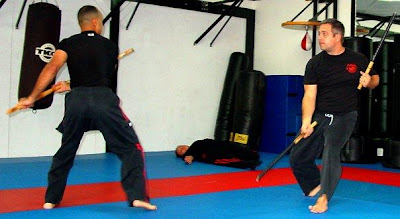 My martial arts journey began in 1978 with the study of Judo and Karate at the Y.M.C.A. and later continued with wrestling (high school) and boxing. Around 1989, was my introduction to the Filipino Martial Arts under the tutelage of Guro Rudy Lams the local I.M.B. Representative. He taught me the arts of J.K.D., Muay Thai, Sayoc Kali & Doce Pares Escrima. Two years later, he closed the doors to his school an event which put me on a quest to find another mentor to further my studies in the Filipino Martial Arts. It was around this time that I met my dear friend and mentor, Guro Bram Frank. Through him, I learned Professor Remy Presas’ Modern Arnis and later Combat Arnis. I currently hold a 5th degree black belt under him and will continue to study under him for life. Along the way, I’ve been very fortunate to meet and train with many other wonderful instructors who have greatly contributed to my understanding of martial art. From 1995 through 2000, I studied J.K.D., Inosanto blend Kali-Silat & Muay Thai under the guidance of Sifu Dwight Woods, earning the status of 3rd rank. Special mention must also be given to Senior U.M.A.A. student, Alison Mc Sweezey for having the patience to coach me through the intricacies of Muay Thai. My boxing mentor, Olympic gold medalist, Coach Bernie Soto. Rounding out my skills to include grappling are my friends and teachers, Renshi Glen Mehlman (Shuri-Goju Ryu & Shinto Yoshin Ryu Ju Jitsu), Coach Isidro Alfonso (Sambo & Freestyle Wrestling) and Sensei Juan Collazo(BJJ). My credentials also include my tenure with Options For Personal Security as chief instructor under tactical training guru Andy Stanford.